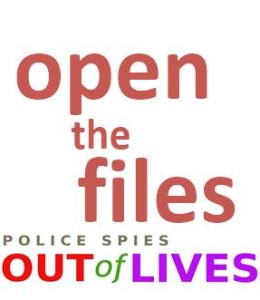 Full Statement from the four women:

“One of the major concerns we have about the scope of the Inquiry into Undercover Policing is that the terms of reference are currently limited it to operations conducted by the police forces of England and Wales. It is very concerning that the activities of the Metropolitan  police’s spies whilst in other countries are excluded.

As women who had relationships with undercover officers, we spent time abroad with these men, whom we believed to be a  friend and close partner.

On all of those visits abroad, the men were being paid by the Police, using the characters created within the undercover units,  working with activists from the UK in these countries, continuing their deceitful relationships with us wherever they went.  Therefore it would allow police to cover up whole chapters of outrageous behaviour if the investigations into their conduct did not include their activities in these countries.

The review into Undercover Policing set up by HMICS in Scotland is an insult to those of us who were spied on there. It is the Police investigating the police, with the people affected by undercover policing being given no voice. Our experience  would lead us to expect a cover up. HMICS is staffed with ex-police, some of whom will return to policing with the force they are examining, and some of whom actually have links to undercover policing in Scotland. It is also limited to events from 2000. Those of us who were spied on in Scotland before that date will not even be included.

We call for a full Public Inquiry to get to the truth of what happened in Scotland, and in all the countries these undercover officers operated in. We call for everyone who was spied on to be given access to the police files held on them in all of these countries. These units were political policing units, akin to the Stasi of East Germany. They must be closed, and held accountable for their actions.”

2. Three of these women have recently written a letter to Scottish Secretary for Justice Michael Matheson, along with eleven other core participants in the Undercover Policing Inquiry, requesting to meet in light of release of terms of reference for the HMICS review of undercover policing in Scotland.

3. The  HM Inspectorate of Constabulary in Scotland (HMICS) review into under cover policing, commissioned by Justice Micheal Matheson reported in 2018.

4. ‘Alison’ and ‘Andrea’ have been in the Scottish Press recently attacking the lack of proper investigation into undercover officers operating in Scotland. Alison gave an interview to Scotsman and Andrea gave a interview to the Scottish Sunday Herald.

5. These women have all made legal claims against the Metropolitan Police arising from their deception into long-term intimate relationships with police officers who had infiltrated social and environmental justice campaigns. These are both common law claims, including deceit, assault, misfeasance in public office and negligence, and human rights claims.

6. As part of an out-of-court settlement, the Met police issued a comprehensive apology to two of these women (Alison & Lisa) in November 2015. A public inquiry has also been launched.

7. These women aim to highlight and prevent the continuation of psychological, emotional and sexual abuse of campaigners and others by undercover police officers.  ‘We come from different backgrounds and have a range of political beliefs and interests, and we are united in believing that every woman, and every person, has a right to participate in the struggle for social and environmental justice, without fear of persecution, objectification, or interference in their lives.’  – from ‘Where we stand’ Statement.