Monica is one of the two of the women involved in Andrea and Monica’s case. She has requested anonymity; this has been upheld by the courts. ‘Monica’ is a pseudonym. 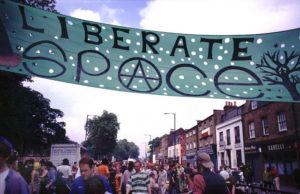 In 2011, old friends contacted me to tell me that it had emerged that the fellow activist we had known as Jim Sutton was in fact an undercover police officer working as part of the Special Demonstration Squad. He had infiltrated Reclaim the Streets in order to spy on us and sabotage our campaigns.

I’d met Jim at Reclaim The Streets meetings in late 95 early 96. I enjoyed his company and believed we shared a common interest in environmental protection and raising consciousness about the damage fossil fuel consumption was doing to the environment. I believed him to be a valued, trusted friend and fellow activist. These feelings led to our relationship deepening, Jim became a central part of my life, I was so glad to be with someone I felt truly cared for me, I trusted him.

The relationship ended over the Autumn of 1997, but we remained good friends and, until I knew his real identity, I looked back on our relationship and friendship with fondness and love.

The revelation of Jim’s true identity sent shock waves through my life and I am still dealing with the after effects of this explosion. As the broken pieces of my perceived past landed, the sorting through and rearranging process began. I have struggled to deal with what has happened to me. It was complicated, and I still struggle to understand and express the effects of this intrusion.

Quickly enough Jim’s new identity as an undercover police officer settled into the realms of fact. Initially I still felt connected to Jim, and the confusion and hurt this created was deeply disturbing. Over the years, however, I have stopped perceiving the tenderness and intimacy as real but see it for the lie it was, undermining and dissolving any emotional connection we may have had. Looking more deeply through the lens of the media coverage, at continuing revelations about undercover police, and at the eight women‘s cases, the depth of the deceit and disregard of my most intimate self hit home.

The years between the unmasking of Jim Boyling, and the Metropolitan Police’s apology followed by the pressures from bringing a case, have not been easy to bear. What is difficult to process about the offences is that it is not about the deceit of one officer – meeting his needs for sex or legitimising his cover. It is institutional, political and endemic abuse concealed within our ‘society’. People who are campaigning for a better world are infiltrated, spied on and abused.

Political undercover policing aims to limit the forces of progressive social change, positive solutions and other perspectives to the current limited and destructive status quo. It seeks to infiltrate, subvert and limit the ability of individuals to raise consciousness and for the collective to address with clear sight and awareness the complex and life threatening dilemmas we face as a species. Institutions with vested interests such as the police, and the press work together to limit the debate to sound bites and reaction. The pertinent issues of our time are neglected, while our collective distraction is amplified.

Despite the police’s apology to the eight women, I have no faith that their fundamental approach has changed.

Monica has now launched a legal case against the Crown Prosecution Service, for their failure to prosecute Boyling (for sexual offences or misconduct in public office). Read more about this. She took part in two interviews, with the BBC and with Rob Evans from the Guardian.

On 14th December, she learnt that the High Court had dismissed her legal challenge. She has now set up her own website.

If you quote any of the above account, for articles, blogs, or academic research, please let us know. Please respect that while these words appear in the public domain, they belong to people who have had their private lives profoundly abused. Thank you