Lisa was involved in the case taken by the eight women. She requested anonymity; this has been upheld by the courts. ‘Lisa’ is a pseudonym. 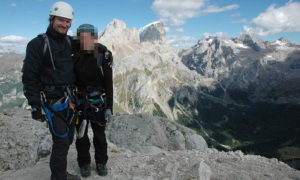 At the end of 2010, I discovered that the person that I’d been in a close intimate relationship with for the previous six years, wasn’t the person who I thought him to be. He wasn’t the like-minded person that I’d been sharing my life with, he was in fact an undercover policeman, who had been put into my life and into my social circles, to spy on me, on my friends, on my political campaign groups, and on everything I’d been doing.

The person that I thought was somebody who was a bit of a maverick, a lone wolf, a bit of a rebel character, turned out to be somebody who had joined the police force when he was nineteen, and had been married since his early twenties, and actually had two kids, and a family somewhere which I had not known anything about.

Not even for a single moment did I believe that the person that I was sharing my life with was that policeman.

And that was what the total life-changing shock was all about. It’s not the same as just hearing that your partner has lied to you, or your partner was married and you didn’t know that they were, and those things must be really devastating as well, and I’m not, I’m not denying the impact of that, but what this is is not just a person lying in their intimate relationship, this is a deception that was actually perpetrated and supported by the state.

He wasn’t just a man who lied to me in a relationship, he was a fictional character, and he was placed in my life by an employer, and his employer was the police, and in order to create that deception he was trained. He was trained in manipulation techniques, he was trained in lying. A back story was created for him by and with his employers. He had a back-room team of people supporting him wherever he went, he had a handler, he had people who were issuing him with fake ID. He was being paid overtime for the nights that he spent with me, which must have amounted to quite a lot of money.

His movements were monitored, which means that for that whole time, my movements were monitored, and one of the big things that I’ve been left with, a lot of the questions I’ve been left with, is to what extent and how deep that monitoring went. When I was sending text messages to my boyfriend, were they being read? How many people were they being read by? How many people were watching, were reading our emails, were reading our letters, were watching us from afar? When we went on holiday, was he being tracked, was somebody with him? How much that we did together was authorised? What kind of paper trail would there be?

Something I’ve been left with as well is this intense feeling that I didn’t quite have the free will that I thought I had, for those six years. Every time I’m making plans to go and see my family and I’m wanting my partner to come with me, he’s then obviously having to go back to his employer and say “I need authorisation to go to this place at this time”. The times that I needed him, that he wasn’t there, was that because he didn’t have authorisation or he was supposed to be on leave? Was he was with his other family? you know, how much of my life’s movements were dictated by the authorisations and the consent he had to have for his movements?

February 2013 – Lisa gave evidence to the Home Affairs Select Committee, alongside Alison and Helen. You can read the full transcript of their oral evidence, and the Committee’s Interim Report can be read in full.

July 2015 – Lisa’s article in the Guardian, co-authored with Kate.

November 2015 – Interview with the Guardian.

November 2020 – Lisa’s article in The Guardian about the public inquiry.

If you quote any of the above account, for articles, blogs, or academic research, please let us know. Please respect that while these words appear in the public domain, they belong to people who have had their private lives profoundly abused. Thank you