Helen was one of the eight women in the first legal case. She is a Core Participant in the Undercover Policing Inquiry. Helen was previously referred to as ‘Clare’. On 22 June 2013 she and another of the claimants, Belinda, spoke out under their real names, in the hope of  increasing public understanding of the nature and effects of the police abuse. 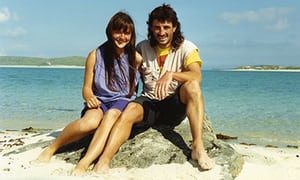 I had a relationship with an undercover policeman who I knew as John Barker, his real name was John Dines. We were together for nearly two years, we shared a flat together and he met my friends and family.

In 1987 I got involved with London Greenpeace. The same year that I started going, I met John at those meetings and also Bob Lambert who was going to the meetings at that time. Bob Lambert left the year after.

John became a close friend of mine over the next 3 years, sharing lots of his stories and personal issues like the death of his parents, being an only child, losing all his possessions when his van was stolen shortly after he moved to the UK. Lots of these were both sob stories and excuses for why there was nobody around him and why he didn’t have any kind of history that you could see

He asked me out several times and eventually we ended up in a relationship, not long after he told me his mum had died and he needed to borrow money to get to New Zealand for the funeral.

In reality, his mum was still alive, so was his dad, and he had brothers and sisters.

Those stories, seeking my empathy and involvement in his life, were a deliberate process of emotional manipulation. He was seeking to draw me closer to him, so that he could spy on me and my friends, to undermine the political movements we were involved in and ultimately to prevent change. This is not just what’s happened to me, this is what has happened to the other women as well.

But I didn’t know that at the time, I felt like I’d met my soulmate. After a while we rented a flat and lived together. We talked about starting a family – he said he wanted lots of kids as he was an only child – and all the kind of things you might talk about in any normal relationship.

In the last 6 months of our relationship his behaviour became very erratic, he appeared to be going through some sort of breakdown. He would disappear saying he was taking himself off to sort his head out, then he would come back and declare how much he loved me – it was a very emotionally draining time.

Then he disappeared for good. I received two letters from him posted from South Africa, saying he was sorry, but he needed to sort his head out and if he did, he might come back.

By this point I was extremely worried about his mental wellbeing and I was actually quite worried that he might even kill himself. I was still deeply in love with him, so I spent ages trying to find out what had happened to him. This process went on for years, but gradually everything I investigated turned up more questions than answers and my concerns grew about who he really was and what he’d been up to.

One day, when I’d just left the Royal Courts of Justice after a day in court with McLibel, as I passed what was then St Catherine’s House, the registry of births, deaths and marriages, I just got this sudden instinct to go in and start looking through the death records. And I then found out he had been using the name of a child who’d died when he was eight years old.

That left me with this great void. I’d been living with someone for two years and I now didn’t even know what his name was. I was deeply in love with this person and I knew nothing about him. It really throws all your other relationships into doubt. If you can live with someone for that length of time and think you know them so well, and then you find out they don’t exist – what does it say for everybody else that you are talking to, that you are meeting with, how can you be sure that anything going on around you is real? How could I trust my own judgement any more?

John disappeared in 1992 and I finally had confirmation that he was an undercover policeman in 2011. That’s almost nineteen years, and over a lot of that period I was trying to find out the truth. The police meanwhile were actually actively taking steps to prevent me and the other women finding out the truth. They had alarm systems in place where if you looked up a birth or death certificate it would trigger an alarm and they would know you were looking for them. I have also been told that when I went to New Zealand to look for John, they then moved him to another country to prevent me finding him.

A video of Helen speaking at a Campaign Opposing Police Surveillance (COPS) meeting on 12 November 2014.

November 2012 –An account by Helen was presented publicly at a meeting in the Houses of Parliament.

February 2013 – Helen gave evidence to the Home Affairs Select Committee, alongside Alison and Lisa. Read the full transcript of their evidence.

February 2013 – Article in The Guardian.

February 2014 – Helen spoke about her experience at the launch meeting of the Campaign Against Police Surveillance. See video above.

August 2014. Interview in The Guardian.

November 2014 – A video of Helen speaking at a Campaign Opposing Police Surveillance meeting (above).

March 2015 – Helen addressing the Women of the World festival at the Southbank Centre.  Her contribution starts at 38.50 into the video.

March 2016 – A year later, on International Women’s Day, Helen confronts her ex partner, John Dines, after 24 years. The Guardian report it with a video interview.

November 14 2016 – Campaigning for the cover names to be released, Helen can be seen talking outside the Home Office.

April 2022 – Helen & others in BBC Radio 4 The Reunion about the McLibel Trial.

If you quote any of the above accounts, for articles, blogs, or academic research, please let us know.  Please respect that while these words appear in the public domain, they belong to people who have had their private lives profoundly abused.  Thank you.