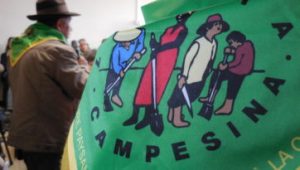 Today, the global peasants’ movement, La Via Campesina, released a statement in support of Kate Wilson, in advance of her critical human rights hearing at the Investigatory Powers Tribunal next week.

La Vía Campesina is a global movement which coordinates peasant organisations, representing 200 million peasants across the world. It is a coalition of 182 organisations in 81 countries, advocating family-farm-based sustainable agriculture and was the group that coined the term “food sovereignty”. Ms Wilson has worked with Via Campesina for ten years.

“I am deeply moved to receive the support of Via Campesina. It is a reminder of the importance of global struggle and solidarity.

Institutional sexism, political policing and oppressive state powers have no place in the world we want; and knowing that I stand with 200 million peasant farmers who are on the front line in the struggle for a better world makes it easier to stand up to an organisation like the Metropolitan Police.”

Public Statement from Via Campesina

La Via Campesina (LVC), on behalf of the 200 million of peasants it represents, publicly expresses support and solidarity with Kate Wilson, who has been supporting and struggling with us shoulder to shoulder for many years.

Kate, in such a brave way, is running a case about police infiltrations, human rights abuses and rightly demanding to access information and to put a stop to organised practices of targeting social and environmental activists. In different environments, we share a common experience of being threatened economically, physically and emotionally.

LVC expresses its deepest solidarity with this important struggle against institutional sexism and institutional prejudice. LVC stands with Kate Wilson and people fighting for justice.

LVC encourages its members and supporters to attend the public demonstration on the 3rd of October in London (https://policespiesoutoflives.org.uk/callout-iptdemo-oct2018/)

More information on the case and on how to support can be found here: https://policespiesoutoflives.org.uk/