As the news filters through about the police’s most recent attempt to have the Public Inquiry into Undercover Policing shrouded in secrecy, two public meetings will take place in London this week: 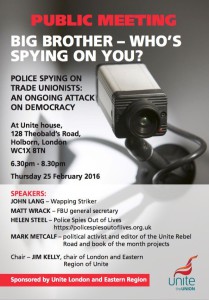 Helen Steel will be one of the speakers. 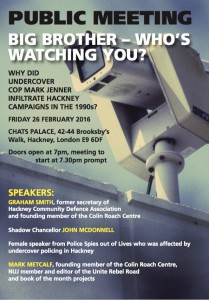 Mark Jenner had a relationship with ‘Alison‘; she spoke to the Hackney Gazette last week.

Both Alison and Helen are still being given the ‘Neither Confirm Nor Deny‘ stance from the Met over their ex-partners, despite the police also having apologised to them and five other women last November.

As the police try to take their shameful Neither Confirm Nor Deny stance into the Public Inquiry to cover up their wrongdoing, it’s clear that public knowledge of their actions needs to grow – public meetings like these are a crucial part of this.

Public Meetings this week re #spycops – Trade Unions and Hackney