Today, 9 March 2016, the day after International Women’s day, news broke that Helen Steel had flown to Australia to confront her former partner.

Years ago, he’d been an undercover officer who was paid to deceive her into a relationship, all ‘because’ she was a social justice and environmental campaigner. Now he teaches police in Australia. She last saw him 24 years ago.

Later this month, on Tuesday 22 March, there will be a hearing in London, to decide how much secrecy should be allowed in the Public Inquiry into Undercover Policing. This is after a string of shocking revelations about the behaviour of the police, in which relationships are only one of many outrages.

Both the police AND the Home Office have gone for broke. They’re asking for secrecy, and for the contested ‘Neither Confirm Nor Deny‘ policy to be upheld.

‘Neither Confirm Nor Deny’ is the exact ‘policy’ that allows former officers to stay unaccountable, and to go on to have careers teaching their abusive techniques to others.

Show your solidarity to those fighting to keep the public inquiry PUBLIC, to those on the frontline of making the police COME CLEAN over abuses: 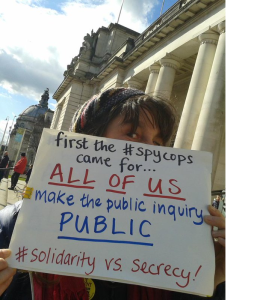 In the face of the police’s arrogance and impunity, every action can seem scarily small. But those who experienced the abuse most keenly don’t have the choice to turn away; sending them a message of solidarity, publicly, is a powerful thing. It says: we understand that it could have been any of us, and that it affects all of us. The police actions affect the fabric of our democracy and every part of our public discourse; we need to reclaim it all.

So please, take action. And remember, none of these actions costs as much as a flight to Australia, nor 24 years of uncovering the truth.

Impressed by the bravery of Helen Steel and others fighting #spycops abuses? Show your solidarity!