On 22-23 March 2016 a crucial hearing will take place in London, as part of the Public Inquiry into Undercover Policing. The two day preliminary hearing is set to determine if the inquiry will be open and transparent or whether it will be a secret process, which would largely exclude both the public and non-state Core Participants.

Several bodies – Metropolitan Police Service (MPS), National Crime Agency (NCA), National Police Chief’s Council (NPCC) and the Home Office – have made written submissions in advance of the hearing. These have been published on the Inquiry website.

These submissions, which run to over 70 pages, argue that the Inquiry should largely be held in secret and that the policy of Neither Confirm Nor Deny should be upheld throughout.

On the other side, non-state Core Participants – that is, people who are part of the inquiry because they were affected by the police infiltrations – will be arguing that it is essential that the public inquiry is just that: public.

For this crucial hearing, we believe strongly that every member of the public should have a chance to understand what is at stake.

To aid this understanding, we have a produced a briefing. It includes
– an overview of the legal framework for the submissions and the factors that the inquiry Chair must consider when deciding these issues
– a summary of the state Core Participant submissions (i.e. the police and Home Office)

You can download and read the briefing here:
Secrets beyond lies briefing

At the time of writing, counter submissions by the non-state Core Participants’ have not yet been released; please look out for them on the evidence page of the inquiry website. (Update: see our new guide to the “Open Justice” submission.) 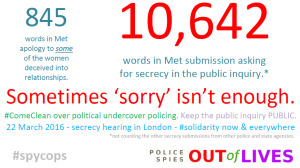 We believe that everybody is affected by the actions of the police, and that the infiltrations attacked the very fabric of democracy and public life. We stand with those who have had their lives most profoundly devastated, and who are fighting back. Please take action with us:
– share a solidarity photo – and ask others to do the same – between now and 22 March
– if you can, come to the solidarity demo on Tuesday 22 March 2016
– write to your to MP to complain about the Home Office’s support for secrecy

Secrets beyond lies: the police and state’s requests for secrecy