Jessica took her fight to the House of Lords last month: 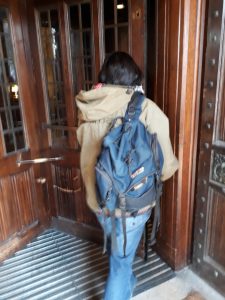 Jessica is not the only victim of one particular spycop’s predatory behaviour.

Another woman who encountered ‘Andy Davey‘ while he was spying on animal rights and environmental activists in the 1990s is ‘Joy’. She came forward with this disturbing story of a late-night encounter with the man recently confirmed to be Councillor Andy Coles.

“I wish to make this statement regarding Andy Coles’ comments in the Peterborough telegraph. I am absolutely disgusted and appalled at his comments. The activists that Mr Coles infiltrated were peaceful and not, as he has stated extremists. As I was one of these activists I can confirm that Mr Coles was a serial sex pest. He was a known creep who liked to get women on their own so he could try and get off with them. His behaviour in public, i.e. in meetings, at protests and in the pub was very different to his behaviour when he got women on their own.

He turned up at my flat unannounced uninvited, late one evening and proceeded to chase me around my living room attempting to kiss and cuddle me. I was forced to repeatedly move away and eventually he gave up. I was a residential support worker at the time living above a hostel. Therefore I was put in a very difficult position by Mr Coles. If it had been a normal flat and not above my place of work I would have shouted at him to get out. Mr Coles was known as a sex pest within the animal rights community at the time. I have no doubt that there are other women he has predated upon that have not come forward yet. I hope that they now will.

Just because Mr Coles is not facing charges means absolutely nothing. He has has predated upon a vulnerable young woman (Jessica). The Undercover Police Inquiry (UCPI) should be told why this young woman was targeted by Mr Coles and who authorised him to act in the way he did. The UCPI needs to get to the bottom of this shameful behaviour of an older police officer towards a much younger woman. What evidence did he gather that was worth sending a sex pest into a peaceful movement to prey on women? They must have known this was what he was like yet it was sanctioned.

His behaviour now is as appalling as it was then. He has no shame and is arrogant in the extreme. Nobody has bullied or intimidated him. The fact that he has made the statement he has shows his ongoing contempt for women in general. He should not be a councilor or in any position of authority whatsoever.”

This follows the publication of a similar account by Emily Johns, a peace activist, who came across Andy in at anti-war demonstrations in 1991.

When his sordid past was uncovered by the Undercover Research Group  ( after his brother, Reverend Richard Coles, had mentioned Andy’s old job in his autobiography), Coles promptly resigned from his post as Deputy Policing & Crime Commissioner for Cambridgeshire. However, he has clung on to his council seat, and is still associated with several schools in the area. There have been calls for him to step down from public office completely, and a local campaign group, ‘Sack Andy Coles‘, has been active, leafleting the town and demonstrating at council meetings.

When the Inquiry officially confirmed that Andy Coles was ‘HN2’, aka ‘Andy Davey’, we hoped that he would provide some explanations for Jessica and the others he spied upon. Instead, Coles has chosen to continue denying any wrongdoing, and even worse, lying about the fact that he had a sexual relationship with teenage Jessica. He is not the only former undercover officer to have tried this tactic; unfortunately for Andy, the evidence is mounting up and the truth will inevitably come out.

Jessica has written this:

“Last week was a busy one for those of us involved in the Undercover Policing Inquiry.

Monday saw the release of spycop HN2’s cover and real name, both of which I have known for over a year now.

When he was my “boyfriend” in the early ’90s he was ‘Andy Davey’. I now know his real name is Andy Coles and he is a Peterborough Conservative councillor. He was outed by his brother, the Rev Richard Coles, in his autobiography.

His naming by the inquiry came with the revelation that he actually wrote the Tradecraft Manual for the disgraced undercover unit, the Special Demonstration Squad.

This manual gives instructions on how to assume a false identity and deceive the people you are spying on.

It starts by advising on how to find a suitable identity, preferably that of a dead child. Then Coles callously jokes about trying to “establish the respiratory status of the dead person’s family” before then assuming “squatters’ rights” over the dead child’s name for the next four years.

Among other things the manual states: “At no time can you instigate, counsel or procure others to commit a crime.” However, there are no such rules in the section on “sexual liaisons” and indeed the advice is for the officers themselves to “make your own mind up about how to proceed.”

Here Coles adds it is “not his place to moralise.” Quite.
He also writes: “If you have no other option but to become involved with a ‘weary’ [their word for activist], you should try to have fleeting, disastrous relationships with individuals who are not important to your sources of information.”

It’s difficult to imagine a situation where the officer has no option other than to have a relationship!

Coles also chose Monday to break his silence and make a statement, unsurprisingly making himself the victim and totally denying that we had a sexual relationship.

He also claimed to have been exonerated by no less than three different investigations, although, as I haven’t spoken to anyone, they can hardly have been thorough, if there was any investigation at all.

On Wednesday March 21 there was a hearing of the inquiry which was well attended by core participants and the legal teams.

Once they managed to seat everybody, the single barrister representing the 200-plus core participants, Phillipa Kaufmann QC, got up to address the chair Lord Justice Mitting.

She started off explaining the concerns the core participants had raised over the way in which he had been dealing with the anonymity applications for the undercover police officers.

He was solely basing this decision on what the undercover officers had told him. He could not hear our side or any differing view from that of the police as we are never to be told who these officers were.

Bear in mind they were highly trained in lying and deception and, as far as we’ve seen from the few who are confirmed, they committed many human rights abuses, miscarriages of justice and engaged in criminal activities.

Yet Mitting consistently finds in favour of their applications, in fact, going so far as to grant anonymity for officers where the risk factor to them is listed as “very low” if they were to be named.

This is all utterly ridiculous when you consider hundreds uniformed police officers give evidence against actual criminals in their own names in courts up and down the country every day.

Kaufmann raised the other issue the core participants have regarding lack of an inquiry panel that includes “individuals who have a proper informed experiential understanding of discrimination both on grounds of race and sex. Two issues that lie absolutely at the heart of this inquiry.”

Instead we have “the usual white upper-middle-class elderly gentleman whose life experiences are a million miles away from those who were spied upon.”

Mitting’s view that officers who were married as young men and are still married to the same woman today were highly unlikely to have committed wrongdoing — his word for sexual relationships with unsuspecting activists — is a prime example of his unsuitability to chair this inquiry alone.

Although he conceded he was “naive and old-fashioned,” he was still “minded to” agree anonymity to another officer on this basis.

The core participants don’t believe they will have the open and transparent inquiry they deserve without a panel.

With the final words, “I am instructed, therefore, together with the entire legal team, to withdraw from this hearing while these issues are considered by you,” the core participants, legal team and Kaufmann got up and walked out of the courtroom.

We can only hope the chair will see this as a plea to allow us to fully participate in the inquiry. After all, it is looking into the police intrusion and abuse in our lives.

That afternoon saw some of us invited by Baroness Jenny Jones to the House of Lords to see her “ask Her Majesty’s government what communications they have had, over the last 30 years, with police forces regarding the tactic of undercover police officers forming sexual relationships to develop their cover stories.”

The answer from the Home Office Minister was basically to wait and see what the inquiry tells us, missing the point once again unfortunately that the inquiry in its current form is failing.

Finally after a six-year battle the Met has admitted that undercover officers illegally passed on information to a company blacklisting construction workers.

The names of these so called “troublemakers” were added to an secret database used by the construction industry to illegally blacklist them.

There are now calls for a public inquiry to look into this latest scandal and a possible legal case against the Metropolitan Police Service.”

It was published in the Morning Star on Wednesday 4th April 2018. 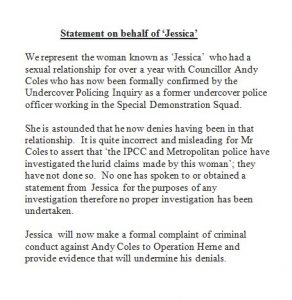 Letter sent to the local paper in Peterborough by Jessica’s legal team, following their one-sided report of Andy Coles’ denial. They still have not corrected the original article or given Jessica a proper right to reply.

‘Jessica’ and ‘Joy’ speak out