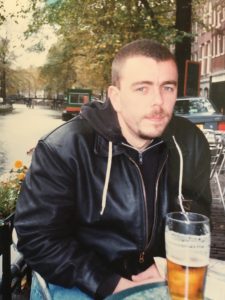 The woman deceived into a five year relationship with him has issued a statement in response.

Mark Cassidy was the long term partner of Alison – a member of the Colin Roach Centre in Hackney – who in 2011 took out a case against the Metropolitan Police, with seven other women who had been deceived into relationships with undercover officers. They had a five year relationship; he moved into her home and they attended relationship counselling to resolve their conflict over starting a family together.

Despite compensation and an unprecedented apology for the ‘violation of the women’s human rights [and] an abuse of police power’, the Metropolitan Police has still has not confirmed Jenner’s identity to Alison. They persist in refusing to admit Jenner was an undercover officer, asserting their position of ‘neither confirm nor deny’.

His identity is only being confirmed by the Inquiry now.

Jenner spied on trade unionists, family justice campaigners, anti-fascists, anti-racists and Irish republicans. He was part of the secret political policing unit, the Special Demonstration Squad, which infiltrated a range of political groups and campaigns in the UK from 1968 – 2008.

“I welcome the Inquiry finally confirming that my former partner Mark Cassidy was an undercover police officer and that his name now appears on the UCPI website’s list of cover names. It is deeply disappointing, however, that it has taken the Inquiry so long to confirm a fact that we exposed over five years ago.

There is no restriction order on his real name: Mark Jenner. Yet his real name – and the real names of other confirmed officers -are not listed on this table, making it hard for the public to keep track of who’s who. It feels as if they’re always trying to keep as much hidden as possible.

His employer, the Metropolitan Police, has still not confirmed his identity or given me any information as to why I was spied on. Despite appealing my Data Protection Act request, I’ve been told repeatedly that the (then) Commissioner had nothing he was obliged to share with me. I cited Jenner in the case we brought against the Metropolitan Police in 2011. In 2013, his photograph, cover and real names were in the press, and I gave testimony to the Home Affairs Select Committee about my five year relationship with him. The Inquiry began in 2015 and I have been given no explanation as to why it has taken three years since then to confirm the truth.

I and other women similarly deceived have received no disclosure about how these abusive relationships were allowed to happen. None of those responsible has been held to account, and the direction the Inquiry has taken towards greater secrecy since the appointment of Sir John Mitting does not bode well for this being remedied.

With other women who have had relationships with undercover officers, I have written this week to the Home Secretary calling for an urgent meeting to discuss our concerns. Our experience is the result of institutional sexism within the police and recent comments by the presiding judge appear to lack any understanding as to what this means.

The Inquiry needs a panel of advisers who have sufficient expertise and diversity to be able to recognise and challenge sexism, racism and police malpractice. As a priority, it should release the cover names of all officers and the files they compiled on activists and campaigners. It should release the names of all groups about whom information was gathered.

If those who have abused their power are to be held to account and the scale of political spying in this country is to be exposed, the Home Secretary needs to act. It is in the public interest for this Inquiry to have the confidence of its core participants. Without transparency, how can the extent of the wrong-doing be understood? How can lessons be learned? And most importantly, how can human rights abuses perpetrated by covert police units be prevented in the future?’ 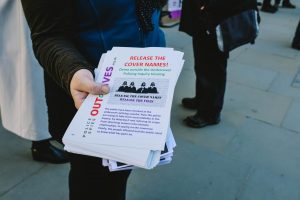