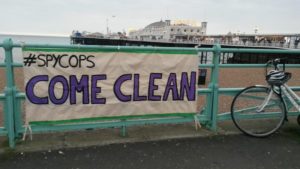 On International Women’s Day, it is with a growing sense of impatience that I reflect on the progress of the UCPI, the public inquiry set up to investigate undercover policing in England and Wales. I am a core participant in this inquiry, as I am one of a number of women activists deceived into long-term relationships by spycops (I lived with, and was engaged to, the notorious Special Demonstration Squad officer ‘Carlo Neri’ for two years).

In August last year I wrote here of my hope that Sir John Mitting, the newly-appointed Chair, would see through the web of state-sponsored lies and obfuscation, that he would listen to our stories in an insightful and impartial way. Unfortunately, with each new tranche of anonymity decisions, it becomes worryingly more apparent that the Chair holds the rights of perpetrators in higher regard than the rights of victims. He clearly sees the officers’ human rights as sacrosanct, withholding the names of the spycops who invaded our homes, our families and our intimate lives.

Let’s not forget, at the very core of this inquiry is the need to scrupulously investigate and expose institutional sexism and racism. Let’s not forget that the undercover units breached our human rights: to privacy and family life; to freedom from discrimination; to freedom from torture. The police have admitted this. Their treatment of us was inhumane.

For us ‘participants’, our current levels of frustration are unsustainable. We do the right thing and attend the almost farcical inquiry hearings, only for the supposedly impartial Chair to follow whatever course is recommended by the army of police lawyers. Mitting even told our QC, Phillippa Kaufmann, he would be meeting her ‘with a brick wall of silence’ should she question him further on two of his anonymity decisions! Secrecy pervades this so-called ‘public’ inquiry, where officers who abused our rights are granted private hearings with the Chair to convince him to protect their privacy.

In cases where the real name is not already in the public domain and where Mitting is aware that an officer has been involved in a deceitful intimate relationship – ‘wrongdoing’ he calls it – he will release the real name. Except there’s a catch – only to the woman affected. Should she then wish to make that name public and hold the perpetrator to account the burden then falls on her, and not the inquiry, to do so.

Surely that’s an unacceptable weight of responsibility for the victim to hold? These men should be held to account by the inquiry, not by individuals affected who can potentially be singled out as ‘vengeful’.

At Mitting’s second hearing as chair in February, he offered us a profound insight into his archaic and misinformed views, compounding what we suspected already. This is one of his most extraordinary statements yet:

“We have had examples of undercover male officers who have gone through more than one long-term permanent relationship, sometimes simultaneously.

‘There are also officers who have reached a ripe old age who are still married to the same woman that they were married to as a very young man. The experience of life tells one that the latter person is less likely to have engaged in extra-marital affairs than the former.”

He is in effect telling us that if a man has stayed married to one woman for a long time then he will not have deceived the women activists he spied on into sexual relationships.

This statement caused outrage in the Royal Courts of Justice. The normally staid public gallery of court 76 erupted. As the whistle-blower Peter Francis – a former undercover himself – acknowledged: these men being investigated are highly trained, highly skilled liars. How on earth can Mitting take what they say at face value? All of the men who we know were engaged in deceitful and abusive relationships were married. These marriages often only broke down when the women activists themselves uncovered the truth.

Helen Steel, who was deceived into a long-term relationship by John Dines, pointed out at the same hearing that, in several cases, officers’ wives were pregnant whilst their husbands were living with activists who believed they were in fully committed relationships.

How’s that for a picture of sexism? The disgusting and immoral practice of deceiving women into long-term relationships has had a devastating impact on those of us affected. And we know there are more women yet to find out.

Given that sex, race and class discrimination are at the very heart of this scandal, is Mitting really the right man for the job? He is after all a member of the Garrick Club, a men-only dinosaur of an institution.

Alison, deceived into a five year relationship by Mark Jenner, is leading a call for a panel of experts to be appointed, who can properly represent and understand the issues at the heart of this scandal. For Alison, the length of time it is taking for Jenner to be officially named by the inquiry is unfathomable, given that her successful case against the Metropolitan Police was launched in 2011. She is one of the eight women, including Helen Steel, who were given a ground-breaking apology by the Met in 2015.

This has been the year of the “Me Too” movement. We have witnessed international outrage at the prevalence of sexual assault and harassment of women in society, in the workplace. Where does that leave us? The crimes perpetrated on us by these agents of the state must be exposed. This was systematic, misogynistic abuse. They must be held to account.

One more thing as I sit here and reflect: just how amazing this group of women is. The impact this discovery has had on my life has been profound, but I cannot imagine how it might be without their support, wisdom, friendship and solidarity.

None of us deserved this.

For us, the personal is the political.

Until the truth is uncovered, our campaign is far from over.

This article was written by ‘Andrea’, and published in the Morning Star on 8th March 2018. More information about the women’s stories can be found here. 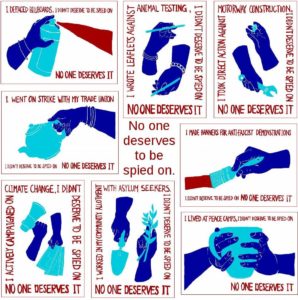