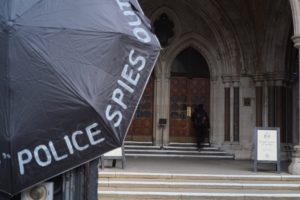 For those of us who have been caught up in the ‘spycops’ scandal – referred to as “core participants” in the public inquiry into undercover policing – this week’s hearing at the Royal Courts of Justice comprised little more than hours of legalese and Kafkaeseque arguments based on redacted documents and closed sessions.

The main focus was on the anonymity applications of a few members of the Special Demonstration Squad (SDS) – the Special Branch unit tasked with infiltrating political groups between 1968 and 2008, forming intimate relationships with female activists, stealing dead children’s names to shore up their fake identities, and spying on family justice campaigns.

One of these officers, referred to only as HN58, was a manager in the SDS from 1997 to 2001 – some of the years when “Mark Cassidy” was deployed. Mark was my partner for five years, from 1995 to 2000, when I was an activist at the Colin Roach Centre in Hackney. But Mark Cassidy’s real name is Mark Jenner and despite the five-year legal case against the Metropolitan Police, I still know nothing about his deployment beyond what I’ve unearthed myself.

HN58 is emerging as a very important figure and someone whose cover identity the judge presiding over the inquiry, Sir John Mitting, is “minded to” keep secret. Then there’s HN23 and HN40, about whom we’re told we can know absolutely nothing. Nada. Not even if their target group was left- or right- wing. It’s another big, brick wall against which we core participants are banging our sore heads.

Ex-SDS officer turned whistle-blower Pete Francis, dressed in his signature black polo neck and looking like the man in the Milk Tray adverts, unexpectedly took to the floor, tapping into the frustration many of us in the gallery were clearly expressing with our mumblings and occasional heckles. Francis warned Mitting not to be taken in by the trained liars of the SDS who – with all due respect – were pulling the wool over his eyes.

There was stunned disbelief and vocal resistance from the public gallery when it became apparent that Mitting really did seem to be saying that he thought an officer who was married some time before his deployment, and was still married to that same person now, was unlikely to have committed “wrong-doing” ( Inquiry code for intimate, sexual relationships with activists). Mitting suggested that as there was no allegation of such wrong-doing (how could there be if HN58 is anonymous?), then the public didn’t need to know his name – ignoring the fact that many of the officers exposed thus far (by activists) might have continued to be married had our revelations not come to light.

When challenged on this point by Phillippa Kaufmann QC, representing core participants, and Helen Steel, representing herself, Mitting conceded he may be “naïve and old fashioned” to hold such a view. But how can it be that in the current climate of raised consciousness about men’s sexist abuse of women – highlighted by the social media campaigns #MeToo and #TimesUp, and the sleazy Presidents Club scandal – Mitting is so naïve to believe that men don’t cheat on their wives?

And how can someone who confesses to be so naïve in regard to sexual politics be trusted as Chair of a public inquiry tasked with exposing the truth about the deployment of professionally trained liars into the lives of female activists?

Yesterday, two new names of undercover officers – deployed in left-wing groups in the 1970s – were released, but we’re still waiting for confirmation of several others, which we were promised before Christmas. I suspect that included in this long-anticipated list will be Jenner, who unbelievably has still has not been officially confirmed by the police or the inquiry despite the apology I received from the Met in 2015.

We’re also waiting for the cover name of HN81, who is closely connected to HN58. Both were associated with the infiltration of the Stephen Lawrence campaign, the shock of which was one of the key factors in establishing the inquiry in the first place.

It’s obvious to core participants that at the heart of this inquiry are the politics of race, sex and class. If we’re ever to get to the bottom of what’s been allowed to happen with undercover political policing in this country, we need an inquiry led by people with sensitivity, experience and real understanding of these issues. From what we’ve seen so far, it doesn’t look as though any of these areas are Mitting’s strong suit. The result is that we are losing confidence fast.

Rather than one senior judge, this inquiry requires an independent panel of experts, along the lines of the one that advised Sir William Macpherson in the Stephen Lawrence Inquiry, or the Hillsborough Independent Panel. And if its findings are to have any credibility with those most affected, these changes need to happen soon.

This was written by ‘Alison’. It was published as a Comment is Free piece by the Guardian on 09/02/18. 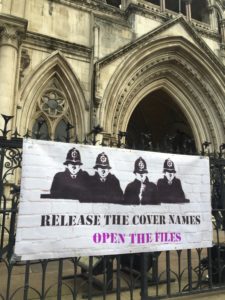 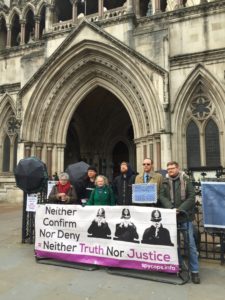 Undercover police abused female activists. But the inquiry is a farce