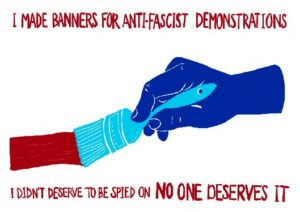 I made banners for anti-fascist demonstrations

I was involved in a community centre in the town I lived in.

A lot of my friends, who I met there, were politically aware, involved in local campaigns, were members of trade unions where they worked, supported good causes, and so on.

When we heard that a fascist group was planning to hold a demonstration in our town we mobilised to make it clear that they weren’t welcome. We had meetings at the centre, which was a multicultural space. I volunteered to make banners for the protest. They were very large and very eye-catching, and were well-received. After this, I made more banners, for similar protests.

None of us realised that opposing the far-right would make us targets for undercover police officers. It turned out that they didn’t just listen in on our meetings and invade our organisation; they literally embedded themselves in our lives.

I still don’t know why he chose me; I can only think that being in a relationship with me made him more credible to other activists, who had known me for years. We still don’t know how much information these officers fed back to their handlers about the women they slept with. 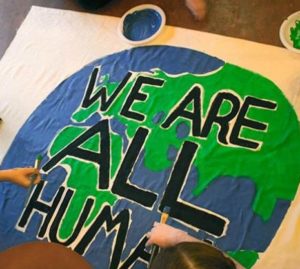 I made banners for anti-fascist demonstrations