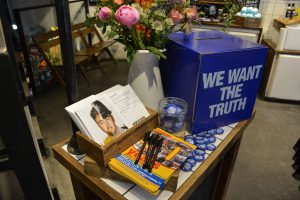 Read our blog-post about the campaign here.

The Lush #spycops campaign, launched last week, is the latest – and arguably the most successful – attempt to draw this ongoing police scandal to the public’s attention. Its aim is to put pressure on the Home Secretary to restore public confidence in the Inquiry into Undercover Policing that was established in 2015 by Theresa May to discover the truth about the activities of these secret policing units. The Inquiry has been fraught with difficulties.

I and others helped Lush make their campaign video. But then I have been involved in campaigning to expose the human rights abuses perpetrated by undercover police officers since our legal case against the Metropolitan Police began in 2011. Along with seven other women who were deceived into long-term, intimate relationships with undercover officers who we believed to be our loved ones, I have received compensation and an apology from the commissioner for this violation of our human rights.

When the first Inquiry Chair, Christopher Pitchford, died, he was replaced by John Mitting, who has failed to inspire the confidence of those core participants who have been victims of these police abuses.

Through our lawyers, core participants have collectively written to Amber Rudd and now to Sajid Javid requesting a meeting to discuss our concerns about the inquiry’s progress. Neither of these requests have been met and our letters have been ignored.

Instead, Javid took to Twitter to respond to the recent social media storm around the Lush #spycops campaign. Perhaps predictably, he used the opportunity to win favour with an already disenchanted police service, which understandably feels under-resourced by current government funding. He ignored the real issues highlighted by the campaign and chose instead to reinforce the misreading of the message, describing it as “a public advertising campaign against our hardworking police”.

While I accept that those members of the public with no knowledge or understanding of the wrongdoing perpetrated by these units may have initially misread the central campaign image, I do not believe this is true of the home secretary. He understands exactly what this campaign is about. He knows exactly what we’re asking of him, and instead of responding to requests to discuss our concerns, he ignores us and rubs salt into our wounds by attempting to de-legitimise our campaign aims.

The Lush campaign is in partnership with Police Spies Out of Lives and the Campaign Opposing Police Surveillance. It makes three specific demands on the home secretary: to appoint a panel of experts – as has been done with the Grenfell Inquiry – to assist the Chair in investigating the wrongdoing; to extend the inquiry’s remit to Scotland where many of the officers exposed thus far were deployed; to disclose the cover names of officers, groups they spied on and to release the personal files of victims.

Instead of taking a lead and using this opportunity to build bridges between campaigners and those members of the police force who are as disgusted by their colleagues’ behaviour as we are, Javid has created further division and mistrust.

The core participants in this inquiry are an incredibly diverse group, from a range of political backgrounds and traditions, some of whom were spied on for doing nothing other than fighting for the truth about their loved ones who had died in police custody. There is no consensus among us about undercover policing per se as a tactic. Some think it’s necessary in certain circumstances; others think there’s never a justification.

The wrongdoing committed by these political policing units is well documented. But we only know the tip of the iceberg and the vast majority of what we know is what we’ve uncovered ourselves. These abuses are not historic. The units have been disbanded and reformed. We only have the police’s word that things are better now.

The Home Secretary needs to be bold enough to step back from his foray into the Twittersphere and meet us. He needs to hear first-hand the impact of what these units have done and ensure the inquiry does its job effectively. If he really cares about “our hard-working police”, the truth about who is responsible for these deployments needs exposing. This wrongdoing is absolutely not about uniformed officers on the beat. It’s about the command structure that facilitated and sanctioned decades of human rights violations. For all our sakes, this truth needs to come out.

The Lush campaign brings that day closer. It should be applauded, certainly not condemned.

• Alison is a pseudonym for one of eight women who successfully took legal action against the Metropolitan police over the conduct of undercover officers. This piece was first published in the Guardian on Sunday 3rd June. 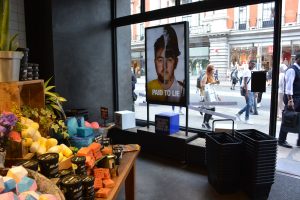 Our initial reaction to the Lush #spycops campaign