On  5-6 June, this case will be in court again. The women have applied to the court to challenge the Met’s delaying tactics in this case, in particular their use of “Neither Confirm Nor Deny” (‘NCND’). The hearing concerns the common law claims of five of the women.

Background – NCND and strike out threats

The women initiated their claim in December 2011, but since then the Met have steadfastly refused to comply with usual legal protocol,according to which they should disclose relevant documents in their possession and respond to the women’s claims.  Instead they have asserted that their NCND ‘policy’ would prevent them (the police) from having a fair trial.

In August 2013 after an application by the women to stop this from dragging on endlessly, the Court ordered the Met to make any applications by September to strike outor limit the women’s claims, otherwise they (the police) would have to disclose relevant documents and properly plead their case.

The Met then issued a strike out application, which was listed for March, and the women and their legal team had to compile evidence against the police’s  that application. Two large files of evidence were submitted to the Court to counter ‘NCND’.

But at the last minute, the police withdrew the strike out application.  While this was good news, it also meant that the police had avoided  court scrutiny of NCND. Their letter of withdrawal defended NCND, and despite the fact that without a strike out application the case should now proceed, no properly pleaded defence was filed. Which brings us to this hearing.

Police are not complying with procedural rules

Harriet  Wistrich, solicitor for this case, explains: “We are making an application that the police must file a proper defence, in accordance with the civil procedure rules by which the defendant has to admit, not admit or deny each and every fact that you assert. To simply assert a policy of ‘neither confirm nor deny’ is not complying with the requirements of the civil procedure rules.”

Wistrich  briefly explained the case against NCND. “The argument is mainly based on two legal precedents. Firstly, NCND does not amount to immunity in tort [a civil ‘wrong’]. That principle was set out by Justice Tugendhat, who stated that NCND policy:

“does not give the  equivalent of an immunity from claims in tort.”

“is not a legal principle. Indeed, it is a departure from  procedural norms relating to pleading  and disclosure. It requires justification similar to the position in relation to public interest immunity (of which it is a form of subset). It is not simply a matter of  a governmental party to litigation hoisting the NCND flag and the court  automatically saluting it.” [Ref.: Paragraph 20 of Appeal Court ruling]

Aim of this hearing

“If the court finds in our favour,” says Wistrich, “then the police will have to disclose relevant documents in their possession and properly plead their defence by responding to each of the factual matters pleaded in the claim. This means the police will be required to answer questions rather than hide behind the supposed ongoing need for secrecy. ”

In  a statement, the women said “The purpose of our application is to  request that the Court bring an end to the obstructive and distressing  approach taken by the police, and require them to plead a proper defence  to the claims. If permitted, the police will continue to use NCND to  cover up the abusive, unlawful and unethical nature of their operations.”

“Three years on and we still don’t have any answers”

Harriet  Wistrich also explains the impact of the police’s delaying tactics in  relation to this case, particularly the use of NCND. “Three years on and  we still don’t have any answers,” she says. “The police must be made to  answer the allegations.

“Ever since the deception started the police have sought to maintain their  deception at any cost – including the psychological harm to the women who have been left not knowing the truth about these operations.

“There is also a huge public interest in this case being properly heard, since it is seeking to explore the operation of undercover officers who have  committed unlawful acts.”

See also the action alert and  press release for this court hearing. 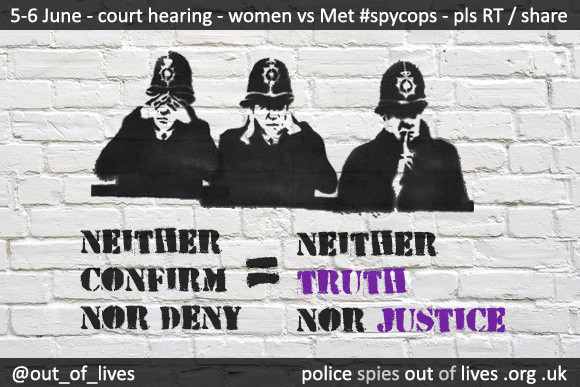