On Thursday 5 June and Friday 6 June 2014 the High Court will hear an application to require the Metropolitan police to drop their “neither confirm nor deny” (NCND) stance in a case being brought against them over undercover relationships.

Eight women are suing the force for assault, deceit, negligence and misfeasance in public office, after being deceived into intimate relationships with five different undercover officers. The officers were infiltrating environmental and social justice campaign groups, and the relationships span a period of over 20 years.

Despite the case being initiated in December 2011 the police have so far refused to properly plead their case, filing a defence which largely states that they refuse to confirm or deny any of the factual matters in the claim. In challenging these obstructive tactics by the police, the women will provide evidence to show that the Met is using NCND as a cover to hide serious wrongdoing, and will seek an order for the police to provide disclosure and properly respond to these claims.

Harriet Wistrich, the women’s solicitor, said: “We are making an application that the police must file a proper defence, in accordance  with the civil procedure rules by which the defendant has to admit, not  admit or deny each and every fact that you assert. To simply assert a  policy of ‘neither confirm nor deny’ is not complying with the  requirements of the civil procedure rules.”

For press enquiries, contact Susanna Thomas of Birnberg Peirce and Partners on 020 7911 0166.

1. Full background information on the case can be found here: https://policespiesoutoflives.org.uk/the-case-overview/

2. Note that this hearing will concern the common law claims of five of the eight women.

3. Further background on this hearing is at https://policespiesoutoflives.org.uk/ncnd-5-6-jun Delaying tactics from the police included a strike-out claim on the basis of NCND – which was dropped at the last minute in March of this year. Two large files of evidence were submitted to the Court by the women’s lawyers to counter the strike out claim. These files detailed instances where the police had confirmed the identities of undercover officers; commented on operational tactics of these political policing units; show the identities of the undercover officers reported in the media; and where the women had meticulously compiled evidence demonstrating that they can show the true identities of the officers. 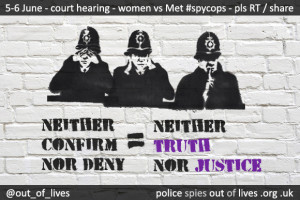