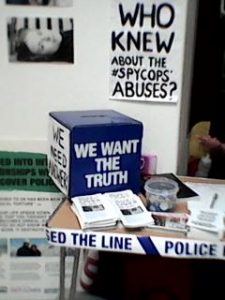 Today, another woman has called out the Metropolitan police for their exploitative actions against women affected by undercover policemen.

In this article Jennifer describes how the police viewed her as being ‘usable, abusable and disposable’; as ‘collateral damage’. The words echo those expressed by many of us deceived by undercover officers – many operating in the same unit as Jennifer’s ex-husband –  in their fake identities.

In solidarity with Jennifer Francis, PSOOL publishes her poem: a personal response that illustrates the painful clashing of private and public lives.

We share an experience of being manipulated, betrayed and abused by the state and will continue to fight for truth and justice together.

A State of Lies – by Jennifer Francis

That gut-wrenching blow
Came five years ago
Direct from the horse’s mouth.
Oh! The devastation I felt
When that blow was dealt
On national television!
The confirmation of a phrase of suspicion.
For all the world to see and hear
Came the final destruction of my marriage.
The union that once I’d held so dear,
That had suffered so much damage.
By his own admission to the interviewer’s question
His betrayal was quite clear.
After all these years the truth was out,
And no longer was there any doubt.
‘He’,
Whoever ‘he’ was,
Had lain intimately with another
And another,
Whilst ‘on the job’.
A spy.
Paid to lie…and lie.
He was also my husband at that time
And to me he had committed the ultimate crime.
What had our union of marriage meant to him?
That he could betray that trust
Seemingly on a whim?
Indeed, had our marriage been a sham
To him?
Crossing the line, blurring the borders,
Justifying his actions
Just following orders?
By Any Means Necessary?
Intimate relationships, not one but two.
Apparently fleeting in nature
Likely, I may never know the truth.
No words of love did he apparently utter,
Does that make his betrayal any better
Or any worse?
And for whom?Five years on, ten years apart
Quietly buried in my heart.
But the betrayal lives on.
In the media, in the courts,
Behind closed doors.
Forever online, in every link, every photo,
In comments, tweets and quotes
And a Vimeo video.
To others who have known such deceit
I stand with you
In the search for truth, justice and peace.
Amongst the lies and deceit and betrayal
From which there is no escape
And which was sanctioned by the state,
I am trying to master forgiveness
And rebuild my trust and faith.

© 2018 Jennifer Francis
All rights reserved. No part of this poem may be reproduced or transmitted in
any form or by any means, electronic or mechanical, including photocopying,
recording, or by an information storage and retrieval system without permission
in writing from the copyright owner.

A State Of Lies – by Jennifer Francis