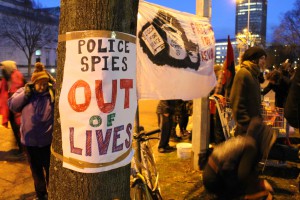 A year ago last weekend, the Metropolitan Police issued an historic apology to seven of the eight women we had been supporting in their legal action against the police after they were deceived into relationships with undercover police. Today, despite these consolatory words from the police, we are supporting two other legal actions, and talking to several others. These people are having to continue to fight to hold the police to account. In these cases, and in the public inquiry, through which we are supporting all of these people, no one has had any disclosure about what has happened to them. The years drag on, and these people, who have been deceived and abused by the police are still no nearer answers.

The apology was comprehensive, saying that the “long-term intimate sexual relationships with women… were  abusive, deceitful, manipulative and wrong” and “a violation of the women’s human rights, an abuse of police power and caused significant trauma”. The police acknowledged “that this should never happen again and the necessary steps must be taken to ensure that it does not.”

The apology was part of a settlement of the cases of seven of the eight women. However, despite their words, it seems that the Police have had no intention of disclosing what they have done, and have continued to drag their heels in the Inquiry and in the legal actions that are ongoing about relationships with undercover police, delaying people from getting to know the truth, and compounding the damage caused by the undercover officers.

The Inquiry itself seems to be under resourced, with less than half the staff of the police’s own investigation, Operation Herne, and the police are currently stalling it with applications for secrecy. There are real concerns about inequality in resources, with non-state core participants, who are being allowed only one barrister to represent their many stories, while the police have four.

Police Spies Out of Lives is pleased to be able to be part of the continued battle for justice around undercover policing, and to support these courageous people in their ongoing fight for the truth, accountability and change. We have secured funding for the year ahead, from Joseph Rowntree Reform Trust, and will be continuing our work, where we meet each of those affected on their own terms, and offer:
• Advocacy around their personal story being in the public domain
• Practical personal support to enable those affected to participate in the legal action & public inquiry.

We create campaigns for the public to show their support and to create social change (as set out in our mission statement: Where We Stand). We:
• Amplify the voices of those affected
• Faciliate ways for those affected to take an active part, while ensuring that they can step away if necessary
• Maintain a focus on grassroots campaigns (rather than allowing legal structures or media cycles to dominate)

We are updating the website to reflect the fact we are supporting new cases. It is work in progress, so please bear with us, as we restructure and add new information. We are glad you are with us in this fight- see you on the streets, and in the court room.