A statement from Peter Francis, former undercover officer turned whistleblower, confirms that Mark Jenner (aka Mark Cassidy) was “100% one of my fellow undercover SDS Police Officers”. The High Court had controversially allowed the Metropolitan Police to hide behind their ‘neither confirm nor deny’ stance regarding Jennner – who deceived ‘Alison‘ into a 5 year relationship before disappearing from her life in 2000.

Alison said living with a police spy has had an “enormous impact” on her life and “impacted seriously” on her ability to trust.

“This is not about just a lying boyfriend or a boyfriend who has cheated on you,” Alison said. “It is about a fictional character who was created by the state and funded by taxpayers’ money.”

Mark Jenner’s boss was Bob Lambert, who is the focus of a campaign to have him removed from his current position as a criminology lecturer at the London Metropolitan University. 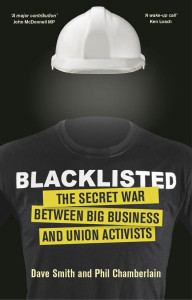 The statement was read by John McDonnell MP, as he chaired the official book launch of Blacklisted by Dave Smith and Phil Chamberlain at the House of Commons on the 12th March.

The full text of the statement is below:

“I am humbled as well as honoured to be offered to speak tonight at such an important book launch here at the prestigious House of Commons.

However I cannot appear here for a number of reasons, including and primarily, because of some very serious outstanding legal issues/difficulties with the Metropolitan Police, that continue to hang over me ever since I became a whistleblower and therefore a potential criminal in their eyes.

I have received clear legal advice that me, even speaking here today, is likely to be considered a breach of the Official Secrets Act because I have not been granted permission from the Metropolitan Police or Home Secretary to speak to you.

This remarkable, well-researched and must-read book clearly shows how police spying on political activists has destroyed lives and that I, most unfortunately and regrettably, played a part in this.

The forthcoming Home Secretary’s public inquiry into undercover policing must include a forensic, independent (in other words, non-police) examination into all the blacklisting files compiled by the Consulting Association and then cross-reference them with corresponding Special Branch individual activists’ records to look at the areas of collusion.

There will be multiple duplicates. Of that I have no doubt at all.

In relation to Mark Jenner aka Mark Cassidy, exposed last week in the media as being a UCATT member.

An anonymous and unaccountable Scotland Yard spokesperson has obviously re-quoted their usual attempted ‘Get out of Jail Free card’ response by saying “We neither confirm nor deny the identity of any individual alleged to have been in a covert role. We are not prepared to confirm or deny the deployment of individuals on specific operations.”

But tonight, here in this supposed home of UK democracy, please let me state very clearly that Mark Jenner was 100% one of my fellow undercover SDS Police Officers deployed alongside me in the 1990s.

Jenner, who has now been very publicly exposed, should be forced to appear in person at the public inquiry to account for his spying on, amongst numerous other political protesters, the totally law-abiding construction union UCATT members whose only ‘crimes’ were being union members.

I would also like take this opportunity to unreservedly apologise to all the union members I personally spied upon and reported back on whilst deployed undercover in the SDS.

Including those not only engaged in working in the construction industry but also those in the National Union of Students (NUS), National Union of Teachers (NUT), Communication Workers Union (CWU), UNISON and the Fire Brigades Union (FBU).

As everything I have previously stated, I am prepared to repeat all of this under oath at the public inquiry and should UCATT or any other union or the blacklisted campaigners wish me to, in any court cases they might bring against the relevant UK authorities.

Yours in solidarity. Because at this precise moment in time, before the public inquiry, there is “No Justice”, there is “Just US”.