Were you – or your group, organisation or campaign – spied on by undercover police?

Undercover police units spied on campaign groups from 1968 onwards – yours could have been affected.

THIS FRIDAY 18 September 2015 is the deadline to apply for ‘core participant’ status.

The post below outlines why and how to apply, and gives pointers for more information.

Even if you don’t think you were directly affected, please support our #ComeClean campaign, keeping up the pressure on the inquiry to bring the #Spycops’ actions into the light. 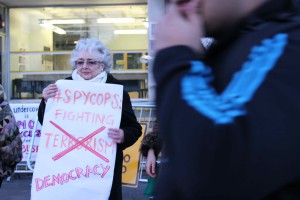 In March 2015, following multiple scandals about political undercover policing, the Home Secretary announced that there would be a Public Inquiry into Undercover Policing. The Inquiry will attempt to investigate and report on “whether, and to what purpose, extent and effect, undercover police operations have targeted political and social justice campaigners”.

The inquiry’s investigation will include, but not be limited to, the undercover operations of the Special Demonstration Squad and the National Public Order Intelligence Unit. It will also look into potential Miscarriages of Justice arising from the non-disclosure of undercover police operations.

Why to apply to be a core participant

Any individual, family, campaign group, trade union or political movement which knows, or even has good reason to suspect, that they were spied on by undercover police, should seriously think about applying for core participant status for this inquiry.

Core participants have a more central status in the Inquiry, are generally given advance notice of decisions and increased access to evidence, including documents. Since they are represented it is much easier to have input into the direction of the inquiry and questions put to the police.

So far there has been little focus on the effects of police infiltration on environmental and social justice movements. Unless activists come forward the Inquiry may avoid looking at this important issue.

Revelations so far have come from activists and the media exposing a dozen or so undercover officers. The SDS alone ran from 1968 to 2008 and in that time operated with 10 undercover officers each year on postings lasting up to 5 years. Then there are subsequent units. There have clearly been many more officers infiltrating campaigns, political organisations and trade unions, as well as spying on the families of people killed by racists, or who have died in custody. The Inquiry should be pressured to reveal the cover names of these officers to enable evidence to be given which may uncover further miscarriages of justice, deceptive relationships and interference with privacy and protest rights.

Concerns to consider over core participation

Ultimately you may be asked to give evidence to the inquiry and may be cross-examined. This is something for people / groups to consider – who might be best to give evidence, taking into account varying factors such as experience and confidence (some people may find this intimidating), roles, what contact with any undercover officer etc.

It is likely there will be attempts to restrict the terms of this inquiry, cut down on the secret information we are able to access, and shut out some people from finding out the truth and achieving any kind of justice. The current police strategy of ‘Neither Confirm Nor Deny’ when faced with legal challenges to undercover operations, doesn’t bode well, and many activists and campaigners may well be cynical about what can be won from such official processes.

How to deal with the tight deadline

With the deadline only days away, it may feel hard to decide how to work through any reservations that people/groups may have about whether to participate in the Inquiry, or whether it will achieve much. But as Core Participants we can also work together to develop a strong strategy to get as much out of the process as possible. So registering in a very simple way now (see below) might still give time to work through how to deal with issues as they come up. The Undercover Research Group are also applying for core participants to represent those who may be unsure about whether they were affected.

If your group no longer exists

For campaigns and movements who have historically been subject to undercover police infiltration, but no longer exist as functioning groups, it might be worth talking to old colleagues and making an application now, although you may feel a wider discussion needs to be had among ex-members/activists. Individuals can also apply if they feel they have been personally affected.

How to apply and what to say

At this stage we suggest not giving huge volumes of information to the Inquiry in your application. We haven’t been given clear details of what will be included or to what extent documents will be made public. As many of these events stretch back over decades, memories may be hazy. It may be more appropriate to wait for disclosure of police or other documents which may act as a memory prompt. A pro forma application is available to download below, for those not sure what they need to say.

Here’s the pro-forma letter of application and full details of where to send it: PRO-FORMA APPLICATION – pdf download

If you are still unsure or want further info, we suggest you read these two statements:

Plus further info on the Public Inquiry website: www.ucpi.org.uk