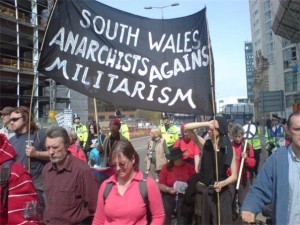 ‘Deborah’ is bravely speaking out for the first time about the trauma she has suffered after having a relationship with Marco Jacobs, an undercover officer and the subsequent five year battle to find out the truth.

This week she gave a interview to Channel Four News, about her experiences, and to the Guardian talking about the effects of the delays in her legal action against the police. She has also written her story down in the form of a statement for Police Spies Out of Lives, which we share below.

Deborah  is one of three of the people involved in her case, she has  requested anonymity; this has been upheld by the courts. ‘Deborah’ is a  pseudonym.

“I was a Cardiff based activist involved primarily with the Cardiff  Anarchist Network and No Borders South Wales since 2004. Marco Jacobs  moved to Cardiff in 2005, after previously living in Brighton  and being politically active there. I met Marco in 2005 when I was a  post graduate student. He was very funny and friendly towards me from the outset and I quickly became close friends with him.  Marco was a well liked member of the many activist groups that he became  involved in. His humour and down to earth nature made him endearing and he often provided comic relief during actions and meetings which, looking back, was possibly a way of trivialising our political activity. Marco was supportive, helpful  and caring towards me as well as my family, particularly so at the time  of my father’s death in 2008 after a long illness. He embedded himself into my life as someone I relied on emotionally and practically, reflecting my views and feelings and boosting my self esteem. In late 2008 my relationship with Marco changed after he declared he had strong feelings for me, telling me that he had moved to Cardiff because of me, ended his previous relationship because of me and that when he found out that I was seeing someone else that ‘it was like a knife’ in his heart. Our relationship became a sexual one where he told  me that he loved me, leading me to leave my partner  at the time to pursue what I thought was a genuine, supportive and  loving relationship. However, he quickly seemed to lose interest leaving me extremely hurt and confused. Marco left Cardiff in 2009, telling his friends here that he was moving to Corfu for work. Shortly after leaving all  communication from him ceased. In 2011, after some  months of speculation among his former activist community in Cardiff and after we undertook some investigatory work, the Guardian newspaper reported he was an undercover police officer.

In  2011 I sought legal counsel about the intrusion into my life by this  unknown officer and the subsequent significant damage this has had on all aspects of my life, including my mental and physical health, relationships and friendships, my ability to work and to engage in political activism. I and one other claimants from South Wales are still pursuing a  civil action against the Metropolitan Police, South Wales Police and  the Association of Chief Police Officers. I have not received any  apology, acceptance of liability or acknowledgement of the huge impact  Marco’s deployment had on our lives. We still do  not know who this man is or why he spied on us for so long. The conduct of the police in these proceedings has been obstructive to say the least. The ongoing delaying tactics they are using have served to cause further significant distress to my fellow claimants and I. It feels like they are continuing to punish us for being activists and for daring to attempt to hold the police to account. It feels like the abuse at the hands of this very powerful institution has never stopped.

On 10th November 2016 the ongoing Undercover Police Inquiry issued a press notice, which stated that the police officer core participant known until then as N519 is Marco Jacobs (this being his cover name). This is significant as until this point the police have never actually confirmed Marco Jacobs was an undercover police officer, despite our 5 year legal battle.  It’s a small victory  in a very long and cruel process.”

Cardiff activist, Deborah, speaks out for the first time