This is one of the most important current spycops court cases. It is a Human Rights case that could result in the laws around relationships by undercover police being changed.

Kate Wilson (KW) is bringing the case. Kate was deceived into a long-term, intimate relationship with an undercover police officer, Mark Kennedy (MK).   She is now taking a case to the Investigatory Power’s Tribunal (IPT), claiming that the police violated her Human Rights under Articles 3, 8, 10, 11 and 14 of the European Convention of Human Rights. 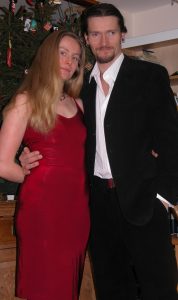 The case has not yet come to trial. The police initially unsuccessfully applied for many parts of her claim to be struck out. In their subsequent written defence, the Metropolitan Police have already made significant admissions, including admitting abuse of Articles 3, 8, 10 & 11 of the European Court of Human Rights, and that Mark Kennedy’s managers knew about the relationship. However, there is still much still to fight for.  They argue against many of her important contentions including the examining how far up the command chain knowledge of this abuse went. To understand more about what the police have admitted, and what they are contesting go here.

In 2017, Kate was one of 8 women who have won an historic apology from the Metropolitan Police over their relationships with undercover police. If successful, this case will finally give clarity that sexual relationships between undercover officers and members of the public under any circumstances are unlawful. Kate’s claim also questions the legitimacy of such political policing in a democratic society, and the legality of the Regulation of Investigatory Powers Act (RIPA) that is used to authorise such operations.

Summary of the IPT pleadings
Press releases about this case:

What you can do
We are looking for campaigning allies against undercover policing and the surveillance state. It is intimidating to take on the state alone, and together we will be stronger.

……write us messages of support… organise solidarity actions….. help us campaign on the issue….. share on social media…. write about our case…. link to your existing campaigns….

We would be grateful to hear about if you would tell us of any solidarity work you do, and share with us contacts/suggestions for other possible allies.